This has been a really good nesting season and it is starting to show.  We have been seeing several broods of pheasants on the roads and in hay fields recently.  Some of the chicks are already almost adult size.  The official reports don't come out until late summer, but signs are showing its going to be an increase crop of birds!
Posted by Rolling Plains Adventures at 9:27 AM No comments: Links to this post

The big 10 point buck harvested at the ranch

Paul's buck harvested at Rolling Plains Adventures during the 2017 hunting season was aged at 7.5 years old and scored around 165".  We believe this buck to be the giant 10 we watched during 2014 through 2016.  This buck was the dominant buck when it was harvested, but not the biggest.  There were already younger, bigger bucks trying to push him out of the way during the rut but he still held his own.   In this bucks prime, we figured him to be in the 180's.  This buck lived to haunt many hunters that came to the ranch, but everyone was excited to see him finally up close.  The buck is another great trophy Paul will add to his collection of giants from the ranch. 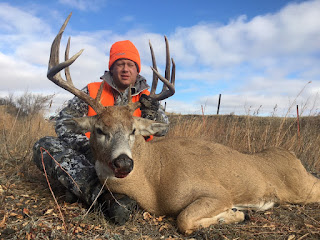 Posted by Rolling Plains Adventures at 1:45 PM No comments: Links to this post

2017 is a wrap! It was great fun to be out in the field hunting with everyone and gathering clips for the 2017 highlights video. This video shows some of the fun times had out hunting as well as what we offer. Enjoy!
Posted by Rolling Plains Adventures at 8:53 PM No comments: Links to this post

The North Dakota Pheasant and Grouse population is looking great for the 2018 season.  So far, North Dakota has received good rains throughout May and June to produce enough cover and insects for the chicks to survive off of.  In 2017, we had minimal rainfall which didn't allow for insects to thrive. therefore not allowing good hatches.  Now moving forward into 2018, things have spun a 180 and numbers should increase a good amount.  Early studies are pointing at a 50% increase in production.
This is great news for Hunting in North Dakota this fall.  ND Game and Fish reports will not officially come out until mid to late summer, so check back for in the field updates from your team at Rolling Plains Adventures. 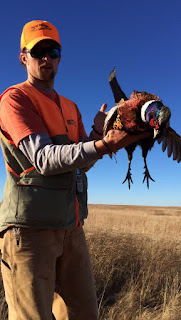 Posted by Rolling Plains Adventures at 8:45 PM No comments: Links to this post

Things are looking great for the 2018 duck and goose hunting season.  North Dakota has received good rainfalls this spring, plus the added snow melt off, which has created an abundance of habitat for nesting.  All this extra habitat will allow more cover to avoid predators, higher success in bird numbers, and added hunting acres for this fall.
Our team at Rolling Plains Adventures is busy working with this new habitat by building new blinds, adding new dams, and creating better hunting areas. This is great news for the 2018 hunting season.  This fall can't get here soon enough!!!
Posted by Rolling Plains Adventures at 12:24 PM No comments: Links to this post

By Clark Schmitz
I have to admit North Dakota was never very high on my list of whitetail deer, archery hunt locations. If not for a discussion or two I had with archers who had hunted there (and more specifically with Rolling Plains Adventures) I might not have decided to hunt North Dakota. 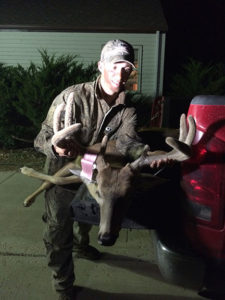 My adventure to North Dakota started with a call (in May of 2016) to Jeremy Doan at Rolling Plains Adventures. Jeremy explained that their archery deer hunts were most productive in September and December as this is when the deer are most predictable. The September opener hunt would also give the archer a chance at a buck still in velvet. I booked a hunt for the first week of the archery deer season which opened at noon on September 2nd   2016.
After a 7 ½ hour drive on the morning of Sept. 2nd I arrived at the lodge, met Jeremy and the other hunters in camp, and got ready for the afternoon hunt. The Friday afternoon/ evening hunt was slow for me but as I arrived back in camp the excitement of the hunt was elevated as one of Jeremy’s guides had taken a nice white tail still in velvet.
Ethan Brazil had arrived at his stand at about 5:30 pm.  At around 7:00 pm a small buck and a great 8 pt. were spotted moving in Ethan’s direction. The two deer slowly worked to within bow range.  Ethan readied his bow and slowly drew back, took aim and released the arrow.  At impact the buck bolted, ran hard in a wide circle around his stand. Ethan watched as the buck went down just 60 yds. from his stand. Ethan had taken deer in the past with his rifle, but had been holding out for a trophy for his first bow harvest. He certainly was rewarded for his patience as he had taken a great white tail deer in beautiful velvet.
The next morning I sat in another ladder stand located in a shelter belt. A nice doe came past which helped pass the time. That afternoon I also saw more does. Arriving back in camp that evening I got word that a second deer had been shot. 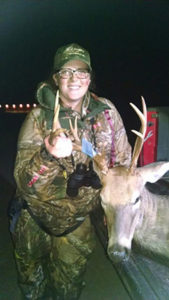 Jesse Brady from Maryland had sat in a ladder stand near a food plot. At 6:30pm a doe and fawn came in and fed for approx. 15 min. before leaving. At about 8:15 a 125 inch 8 pt. came in to feed. A few minutes later Jesse noticed the 8 pt. looking back over his shoulder. Soon after a tall 7 pt. (still in velvet) worked his way to the food source. Jesse knew immediately it was a shooter. The 7 pt. showed aggression towards the 8pt for a few minutes as Jesse waited for a shot opportunity.  As the 7 pt. started to wander off, Jesse grunted to stop the buck. The buck was now at 28 yds. as Jesse squeezed off the shot and watched as the fatally wounded deer disappeared into the food plot. Admiring Jesse’s tall velvet buck in camp Saturday evening again sent spirits souring for all the hunters in camp!
Jesse had traveled some 1600 miles by auto from Maryland with good friend Nick Galatis from Virginia. They had hunted with Rolling Plains Adventures previously, both having harvested good deer. With Jesse’s tag filled I became Nick’s new, texting from the stand companion, for the rest of the hunt, which I really enjoyed.Sunday (day three) was slow due to a storm front that moved thru. Two new hunters did arrive on Sunday. Derreck and Dannielle McCombs from Michigan joined camp after having been married on Saturday Sept. 3rd.  They were both bow hunters on their honey moon to hunt white tail deer. How cool is that!
Monday morning I was back in the shelter belt stand and saw two velvet bucks that were not quite mature enough to harvest. The evening hunt was slow with no deer spotted.
Arriving back in camp that evening I got word that another deer had been harvested. Newly wed Dannielle McCombs evening hunt started with a few does coming into the food source about 7:30 pm., feeding for a short time and then moving off. With only several minutes of shooting light left a nice hard horned buck appeared. As it slowly moves to feed Dannielle started to slowly stand up for a shot. As she did her safety harness had caught on the stand preventing her from standing. The deer (having caught the movement) is now looking directly at her as she slowly sat back down. She then (while sitting) slowly drew her bow, took aim, and watched as the arrow hits the quartering away deer perfectly. The deer bolts but runs only a short distance before going down.
While we admired her deer at camp, she explained that last season (2015) was her first year to bow hunt. She had hunted every weekend of the Michigan season and did not see a deer from the stand. Having harvested the first buck ever seen (and a trophy) from the stand, on her honey moon, will be a memory she will not soon forget.The last three days of my hunt I continued to see deer but not the trophy class I was looking for. The trail camera pictures indicated the mature deer were certainly there but many had gotten into a night time pattern of movement. 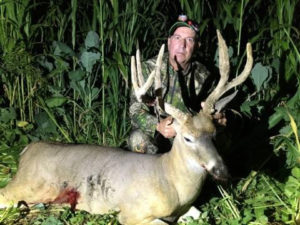 Winter is in full swing in North Dakota.  Temperatures are pretty cold now, but we were fortunate enough to have a mild December this year.  We only have around 5 inches of snow on the ground as of January 12, 2018.  Wildlife have access to plenty of food on the ground with this minimal snowfall.

Pheasant numbers are staying strong throughout the winter. We are hoping the rest of January and February are mild so pheasants go into breeding season healthy.

Deer are still spread out and haven't herded up yet.  There are some smaller herds now, but they are very relaxed this season.  We actually have seen some rut activity still going on recently.


Posted by Rolling Plains Adventures at 6:15 PM No comments: Links to this post