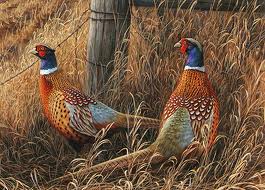 Statistics from southwestern North Dakota indicate the number of broods was up 37 percent and number of birds observed was up 30 percent from 2011. Observers counted 19 broods and 168 birds per 100 miles. The average brood size was 6.5. “Census numbers indicate this district will have the best pheasant numbers in the state this fall,” Kohn said. “A stronger breeding population this spring coupled with good production should provide hunters with plenty of birds and a good number of young birds this fall." Kohn says while the southwest portion of North Dakota will have the best numbers, wingshooters would be wise not to overlook the central part of the state.

Results from the southeast show the number of birds observed was up 134 percent from last year, and the number of broods was up 144 percent. Observers counted nine broods and 88 birds per 100 miles. The average brood size was 6.6. “Even though this district shows a large percentage increase, pheasant numbers were pretty low last year,” Kohn said. “With that said, hunters should see more pheasants than in 2011, especially after row crops are harvested.”

Statistics from the northwest indicated pheasants are up 258 percent from last year, with broods up 268 percent. Observers recorded nine broods and 79 birds per 100 miles. Average brood size was 6.3. “Similar to the southeast, hunters should temper expectations because numbers were low in this district last year,” Kohn said. “There will be some areas where pheasant hunting will be slow.”

Season Dates: October 12 through January 6, 2013
Daily Bag Limit: 3
Possession Limit: 12
Field Notes:: If you’re thinking about traveling to North Dakota, note that if you’re born after 1961, you must complete a certified hunter education course and show proof of certification when buying a license.
Posted by Rolling Plains Adventures at 10:03 AM No comments: Links to this post